This article is a list of weapons that appears in Metal Gear Rising: Revengeance. Although the game primarily focuses on blade weapons, missile/rocket launchers and throwable weapons are procurable as sub-weapons. Several weapons can also be procured from the bosses. Most of the non-blade weapons in the game are, as a first for the series, fictional.

Sword fashioned after a feudal Japanese "Kabutowari" (a.k.a. hachiwara) sword, famed for its alleged ability to split an armored helmet (kabuto). Armor Breaker has the same stats as the Stun Blade, with a 20% chance of instantly turning armored target to its blue vulnerable state instead of a chance of an instant Execution prompt. Awarded upon obtaining all left hand ID chips and then completing any level on any difficulty, costing 20,000 BP. Doktor also alluded to creating this in-story, stating after completing the set of Patriot data in all the left hands that he can start work on his masterpiece.

A straight-bladed "Ninjato" sword included with the Gray Fox custom body DLC, it is exactly the same sword used by the original cyborg ninja, Gray Fox, with its description also implying that Fox’s soul is encased within the sword. Effectively a cheat sword, it is essentially the same as the HF Blade in terms of stats but is capable of ignoring armor, with the only drawback being that even when it is unlocked via code, it still costs 200,000 BP. Purchasing the single special upgrade (which increases the chance of ignoring armor to 100%) costs another 100,000 BP, while the other upgrades are the same as the HF Blade in both nature and cost.

The Fox Blade can instantly cut all forms of armor (parts which soak up damage and turn blue) as though they were blue and it were in Blade Mode, which makes it extremely powerful against heavy cyborgs and UGs; in normal mode, a single strike is capable of cutting a Grad UG in half. Against regular unarmored foes it is effectively always in Blade Mode. It cannot do anything to parts which deflect strikes, making it of less use against enemies such as the first Grad UG. This deadliness, however, does make it poorly suited to getting good combo scores, and if the player is not good with Zandatsu kills they will very quickly find themselves short of FC due to the very low number of normal hits they are performing in combat.

Raiden’s primary weapon. A customized version of the HF Blade Raiden previously wielded in Metal Gear Solid 2 and Metal Gear Solid 4, it now boasts a connection to Raiden’s internal fuel cells (FC) which allow it to enter a special "Blade Mode" where time appears to slow and the weapon’s strength and cutting power are increased. During the prologue chapter, Raiden instead uses his original HF Blade, which does not have any of the additional functions of the main game’s HF Blade.

The HF Blade has five upgrades to each of three categories: strength increases cutting power, absorption the amount of fuel cell electrolytes gained from each strike on an enemy, and energy decreases the speed at which FC energy is drained in Blade Mode. When fully upgraded it is the second strongest weapon in the game in terms of stats, beaten only by the HF Murasama and HF Long Sword, and has the lowest energy consumption in Blade Mode.

The HF Long Sword is simply a lengthened version of the standard HF Blade. It was modeled after the Nodachi sword from Feudal Japan. When fully upgraded it matches the power of the HF Murasama, but is 10% slower than the HF Blade and 20% slower than the Murasama, and also has the highest rate of FC consumption of any weapon and very poor energy absorption. Awarded upon finishing all non-DLC VR missions with a "1st" ranking.

The short machete used by PMC cyborgs is awarded upon obtaining 10 data storage items, costing 5,000 BP. While fast, it is only half as long as the standard HF blade and is also weaker (sharing the stats of the Stun Blade and Armor Breaker), making it hard to use effectively.

Jetstream Sam’s signature blade replaces Raiden’s original HF blade after it is destroyed by Steven Armstrong. It is available in the final boss battle, and is unlocked for normal use after beating the game once, costing 10,000 BP. It lacks its distinctive sheath, instead using Raiden’s default one, and has the same moves and upgrade options as the regular HF Blade.

The Murasama is extremely powerful when fully upgraded and has superior reach to the HF Blade, making it the strongest weapon in the game in terms of raw damage, though the Fox Blade is more effective against armored enemies. It is also 10% faster to swing than the HF Blade and has boosted energy absorption.

It is also Jetstream Sam’s primary weapon in the DLC.

A wooden bokken that cannot cut, used to subdue cyborgs without killing them. Made from Honduran mahogany, apparently the wood best suited to HF blade treatment. Awarded upon discovering all the men in boxes, and costs 5,000 BP.

Unlike lethal swords, it starts with a strength rating of 5, which can be reduced via upgrades. As well as the usual absorb and energy use options, it also has a special effect which increases the chance of a given blow knocking an enemy out, up to 20% per hit. The wooden sword can still kill if an enemy is struck too often, which is where reducing the attack power comes into play.

The sword totally ignores armor and hitpoints, with a straight one in five chance of taking the enemy out of the fight when fully upgraded no matter how powerful they actually are. A successfully stunned enemy will fade out as if cloaking.

A weapon exclusive to the Japanese version of the game, the Heb > ( 蛇魂 , Hebidamashii ? Snake Spirit) is available as part of the VR Missions DLC released in March 2013 and can be purchased in-game for 10,000 BP. It is a mystical wooden sword created through the latest advancements in "spiritual technology" in order to pass on the wisdom of the legendary Solid Snake to future generations. It plays a variety of voiced quotes from Solid Snake depending on the situation (i.e. if Raiden encounters one of the Men In Boxes, the Hebidamashii will remark that "people who like cardboard boxes can’t be that bad"). Its combat capabilities are otherwise similar to the standard Wooden Sword.

The Stun Blade is a relatively weak weapon, with the same general stats as the Armor Breaker and HF Machete, but has a chance of up to 20% to stun an enemy with every strike. Stunned enemies display the Execution (Triangle+Circle / Y+B) prompt instantly. In spite of its name, the Stun Blade is not a non-lethal weapon. Awarded upon obtaining all 20 data storage items and then completing any level on any difficulty, costing 20,000 BP.

The main weapon of the LQ-84i in the Blade Wolf DLC. It served as one of the LQ-84i’s primary weapons prior to it joining Maverick. Its rotation mechanism had been enhanced to allow for the chainsaw’s teeth to vibrate at high-frequency, allowing it to act as a makeshift HF blade and thus cut through concrete walls and opponents limbs with ease. It was useful for multiple combat objectives, including close range offensives and securing battle zones. it is very useful in crowd control, because of it’s bigger impact range compared to the Murasama and the HF blade. 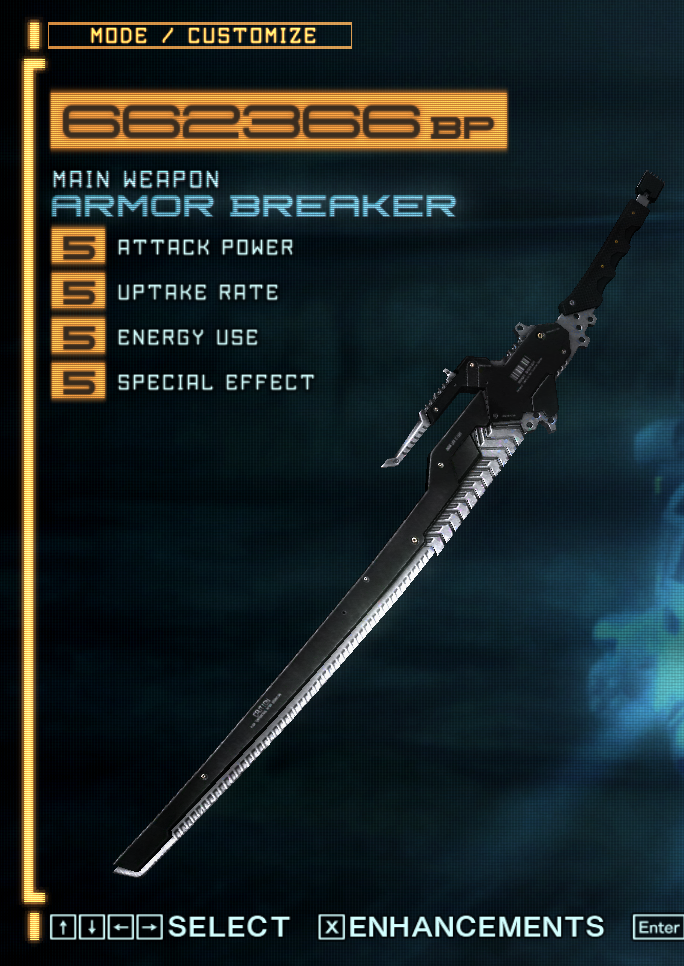 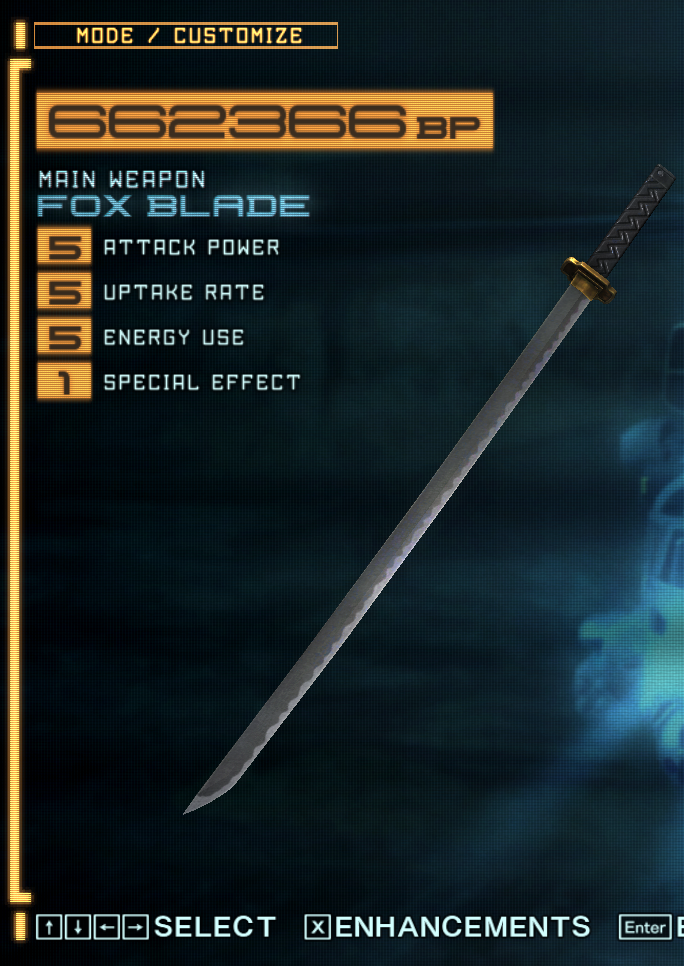 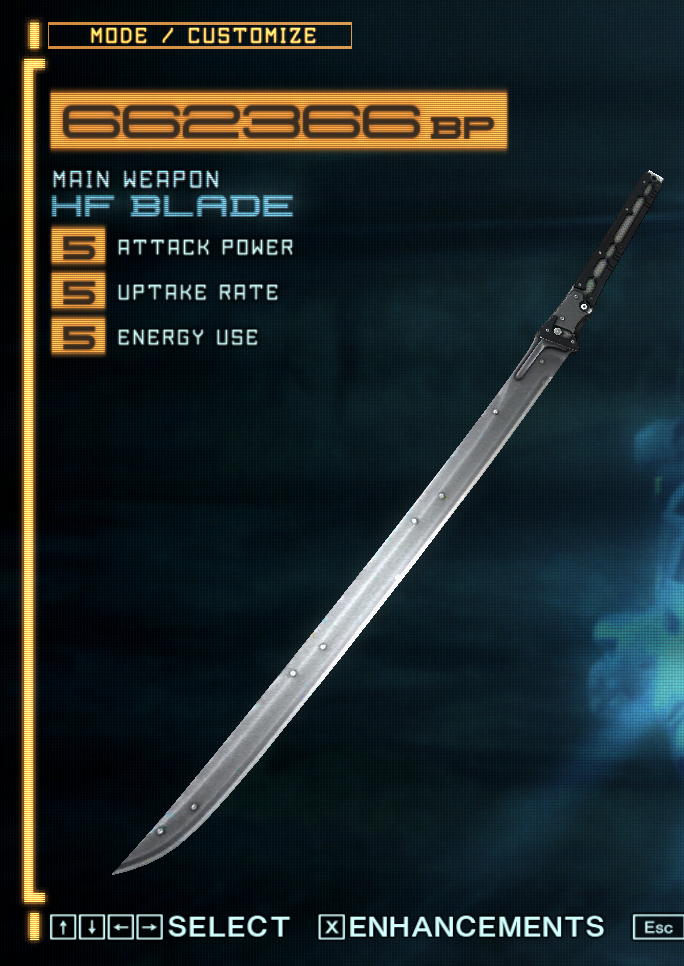 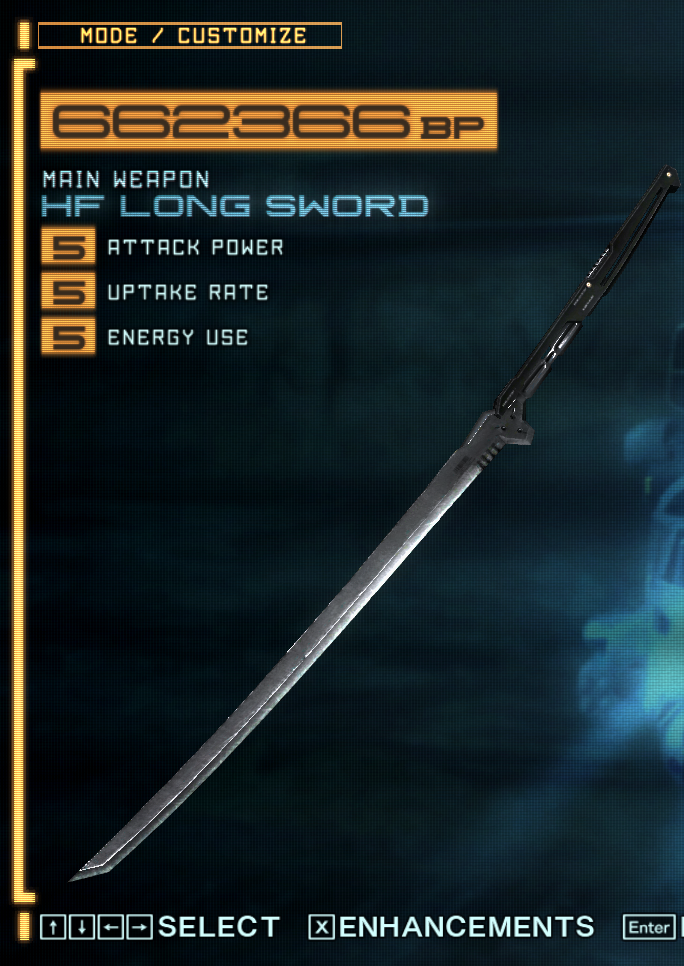 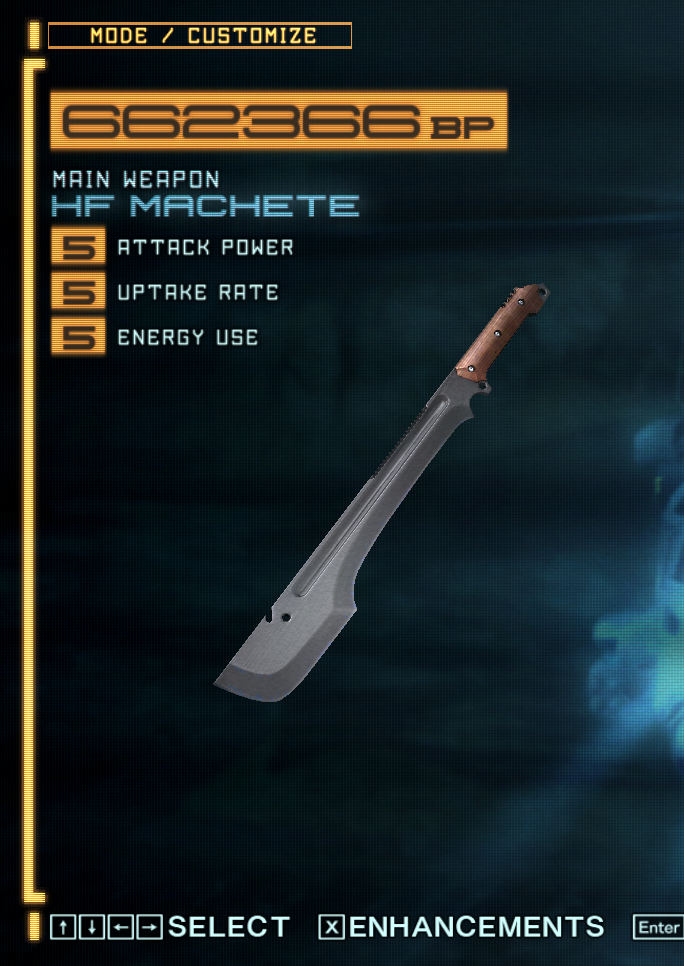 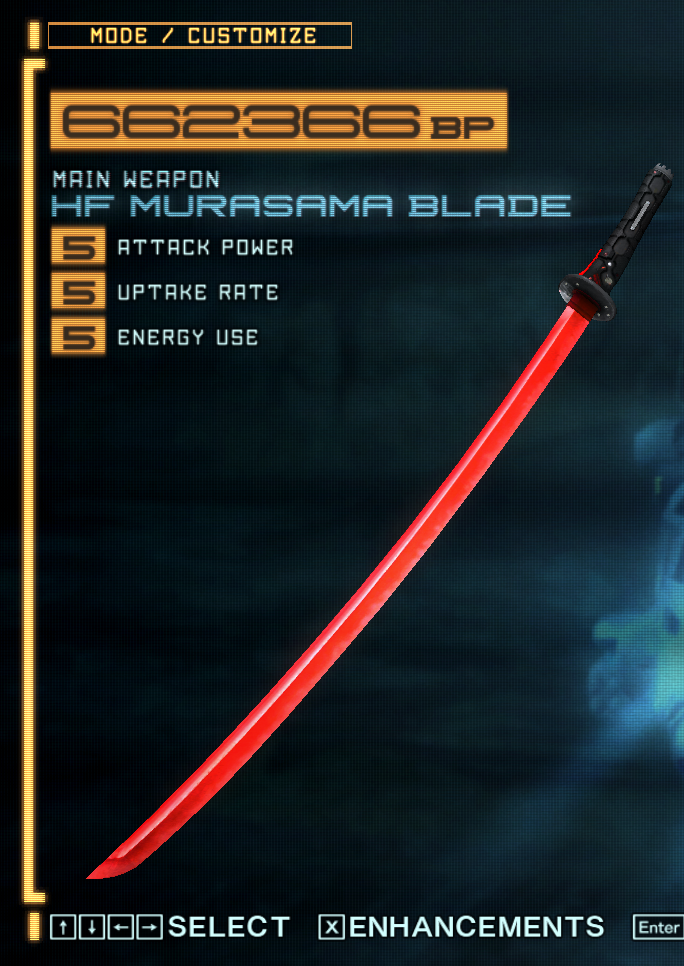 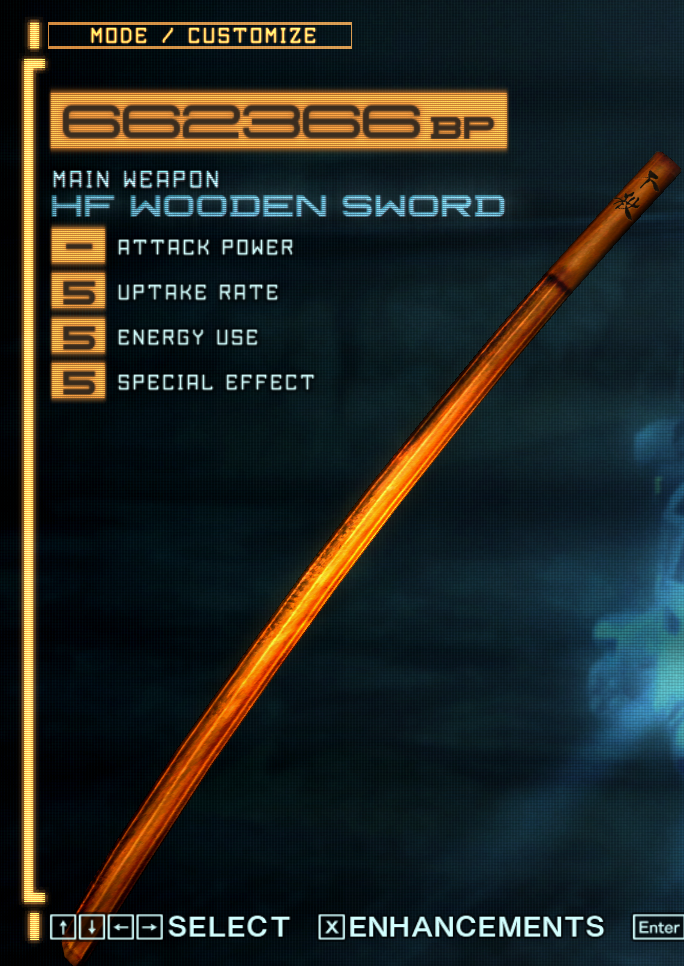 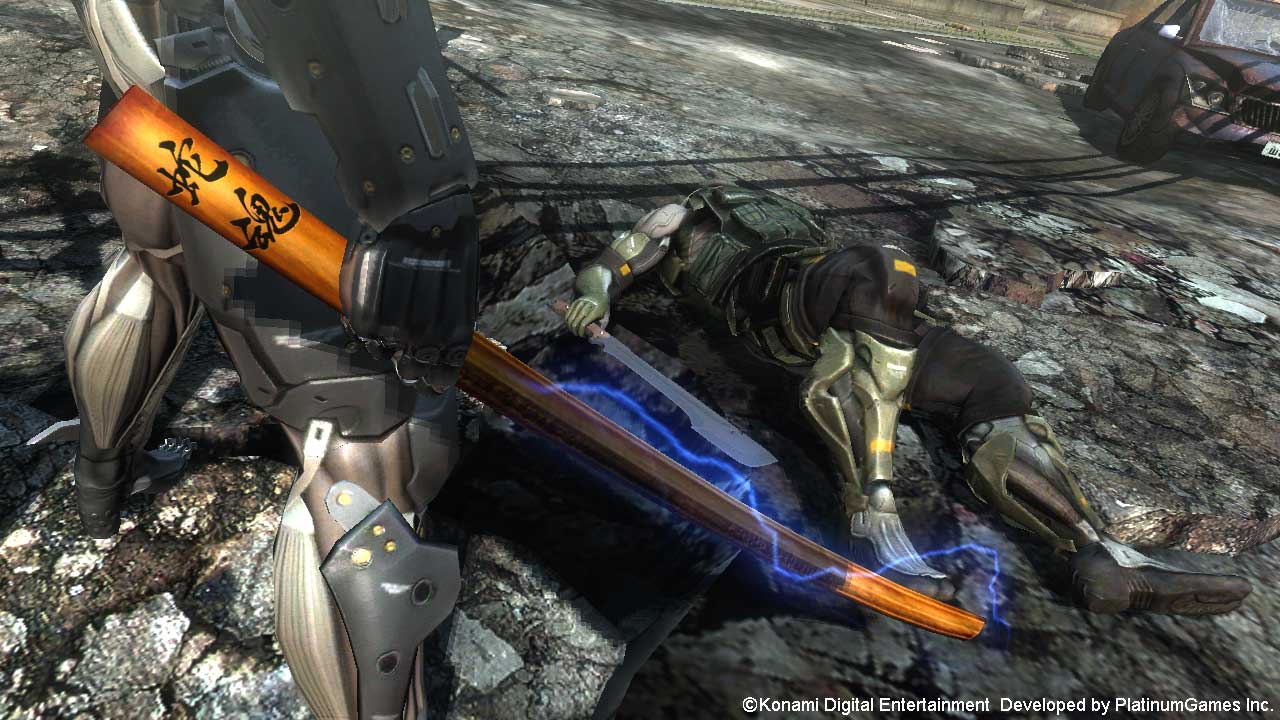 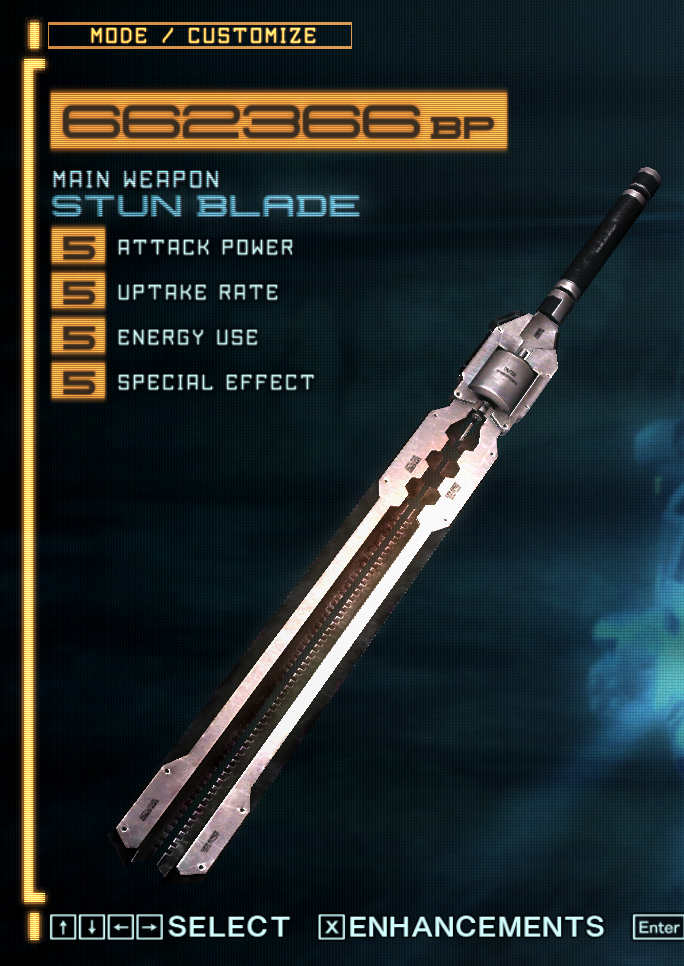 In addition to the above blades, there are also three unique weapons which can be purchased, each also requiring the defeat of their former owner. If equipped, a Unique weapon replaces the standard strong (kick) attacks with its own, and generally disables any special moves which use the strong attack button. Unique weapons cannot be used during a Ninja Run; this will just execute the standard sliding animation. All Unique weapons cost 10,000 BP to unlock, and only have strength upgrades, though L’Etranger and Bloodlust also have special moves which must be bought separately. The descriptions explain that these are not the actual weapons, but rather replicas developed by Doktor from his analyzing their combat data.

A pair of huge square-tipped HF blades resembling European executioner’s swords, mounted in a bracket that allows them to be used as a giant pair of shears. They are a slow but extremely powerful weapon in Raiden’s hands, used for sweeping, heavy strikes. They are retrieved after defeating Sundowner. Codec calls during the fight with Sundowner mock the very concept of the weapon.

All of Bloodlust’s moves can be charged for additional damage and hits, including its air slash. Any hit in its basic combo or extended basic combo can be charged independently: previous hits do not have to be charged for later ones to be. In addition, the full charge can be held: Raiden will remain in a "ready" pose until the button is released. Unlike the other subweapons, equipping Bloodlust does not disable the sweep kick (back-forward-strong) or thunder strike (forward-forward-strong) special moves, even though the movelist implies it does.

Bloodlust’s strike animations have absolute priority and give Raiden an immense defense boost, to the point that on lower difficulties he is basically invincible while swinging it; he can, for example, avoid being knocked down by a charging Gekko if he is swinging Bloodlust when it contacts him. There is a substantial wind-up and wind-down time to each swing in which he remains vulnerable, however. Bloodlust deals so much damage it is actually possible to skip entire phases of bosses with it; for example, it is possible to kill Blade Wolf before he is ever able to call in a Gekko, or to force Metal Gear Excelsus to immediately bring its second leg into the arena after its plasma cannon attack.

A single one of the twin magnetic sais used by Monsoon, the name a term for the diametric opposite of a utopia. Dystopia has no real moveset, instead functioning as essentially a grappling hook: the strong attack button throws the sai at enemies or straight ahead if there is no suitable target. The basic attack of Dystopia is a simple long-ranged strike which does little damage, but holding the button will pull Raiden to any enemy it strikes, delivering a powerful kick as he hits them. Dystopia charges up if not used for a moment, glowing purple instead of blue; in this state its basic attack will inflict STUN status on an enemy it hits, in the same manner as an EMP grenade. It is primarily useful against air units such as Sliders and Hammerheads. Retrieved after defeating Monsoon.

A polearm made out of Dwarf Gekko arms, with a blade on both ends: the name means "the stranger" in French. Capable of rapid attacks, with Raiden alternating between using it as a polearm and a whip automatically during combos. Individual strikes are relatively weak and do not tend to stagger tougher enemies, but the weapon’s range is deceptively long, the rapid attacks do high damage over time, and L’Etranger is excellent for achieving a high combo score for ranking purposes. It is retrieved after defeating Mistral.